Gartner’s 2022 Emerging Technology Hype Cycle puts the metaverse at the very beginning of the “triggering innovation” phase of technology adoption, with a decade to go before the “productivity plateau” is reached. However, recent news suggests that the “trough of disillusionment” is emerging sooner than expected.

Meta’s Reality Labs division reported an operating loss of $3.67 billion for the quarter ended Sept. 30 and a loss of $9.44 billion for the previous nine months. Just two weeks after those troubling Q3 2022 results, CEO Mark Zuckerberg announced 11,000 layoffs across all divisions of Meta (about 13% of the workforce), citing “the macroeconomic slowdown, increased competition and the loss of signal advertising.”

Despite this setback, Mark Zuckerberg said Meta remains committed to a small number of high-priority growth areas, including its “long-term vision for the metaverse.”

Immersive meetings, an identified use case

The Metaverse, or at least Meta’s vision of it, is clearly proving expensive to build, and recent media coverage — including reports of sparsely populated virtual worlds, the collapse of the FTX cryptocurrency exchange, and legless avatars — got a bit more shiny. out of this highly acclaimed component of Web3.

However, the metaverse technology adoption curve may actually follow the default pattern, and immersive virtual meetings are an early use case.

With remote and hybrid work now well established, attention is being directed to the issue of proximity bias, i.e. the idea that incumbents have disproportionate influence and experience greater career success simply because they are more “present” in the workplace, including in meetings, than remote workers.

Video conferencing device vendors such as Logitech and Owl Labs are working to level the playing field for remote participants in video meetings, but avatars (enhanced, full-body) interacting in 3D virtual meeting room spaces are soon a viable and more inclusive alternative.

To start, choose your version and build your avatar

Meta and Microsoft have been promoting this solution recently, and others will surely follow, but we decided to test hardware and software from a well-established supplier in this field: HTC. 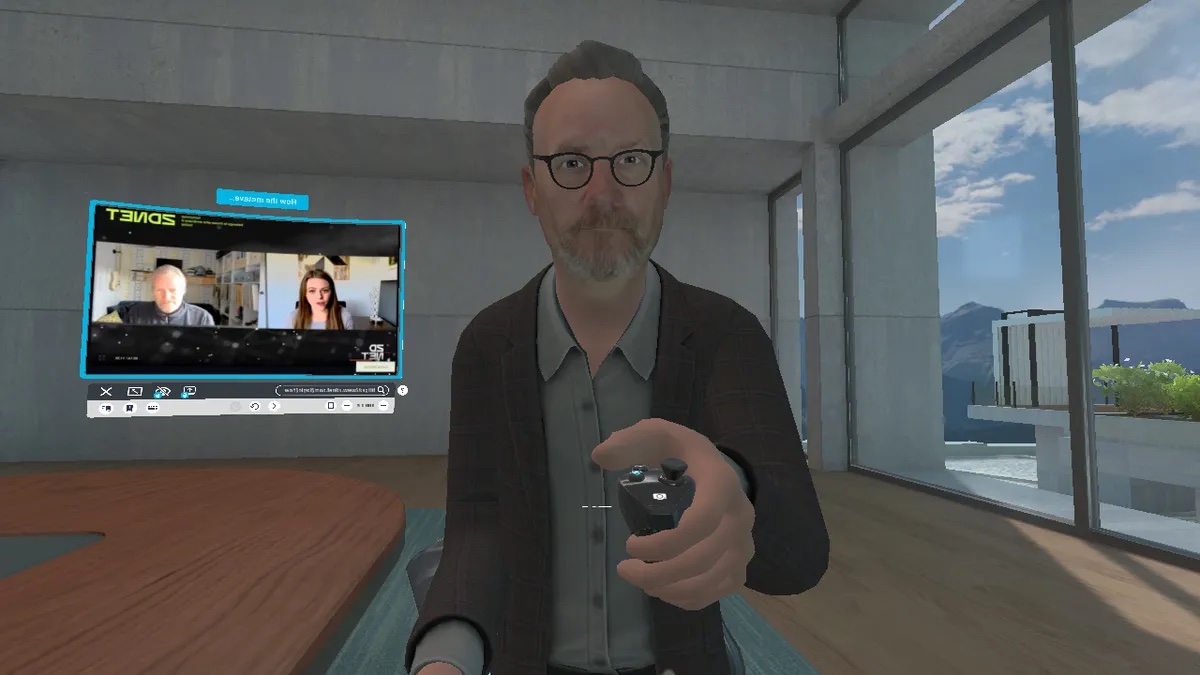 The author, in avatar form and in real life. Screenshot: Charles McLellan/ZDNET

HTC’s virtual meeting app, Vive Sync, was announced in November 2018. It got a boost in visibility at the start of the Covid-19 pandemic when it became available for free in beta. Now it’s an integral part of HTC’s metaverse ecosystem.

Vive Sync offers a variety of virtual meeting rooms, including meeting rooms of various designs and sizes, a trio of auditoriums, as well as a sci-fi room, a scenic bayside location and a cloud room.

You can host meetings from the Vive Sync website by copying the invitation to share with other participants, creating them from Sync on your headset, or scheduling them directly from your Outlook calendar with the appropriate add-in. From here you can also upload different types of files to your meeting place, including 3D models, and upload screenshots and other files (such as audio recordings) created during your meetings.

Once you’ve created an HTC account and set up your headset, choose your price. There are two versions. The first, Lite, is free: it limits you to five hours of hosted meetings per month, three participants and 500MB of storage space per month. meeting room and one 3D model that is uploaded and shared at a time.

The second full version costs $250 per user per year or $30 per user per month (a 30-day free trial of the enterprise version is also available). It allows you to organize an unlimited number of hosted meetings, accommodate up to 30 participants, have 5 GB of storage space for meeting rooms, share multiple 3D models, save minutes on audio in meetings and share a PC desktop and web browser. The comprehensive plan also allows you to add custom branding to virtual meeting rooms and assign roles and permissions to participants.

In addition to using a PC or standalone VR headset, you can access Vive Sync sessions via desktop or laptop (Windows/MacOS), or smartphone or tablet (Android/iOS).

Finally, of course, you also need to use an avatar, via the Vive Sync Avatar Creator, which is available for Android and iOS devices. You can base your avatar on an existing selfie or photo and adjust various settings to achieve a reasonable likeness.

Lots of features, for a fun first experience

HTC loaned us two Vive Focus 3 headsets (including one with the new Facial Tracker plugin) so we had the bare minimum for a metaverse meeting. My ZDNET colleague Steve Ranger and I first found ourselves in a modern conference room with a garden and a mountainous landscape as a backdrop. We also found ourselves in a tropical looking “ocean view” meeting room. The weather was of course fine – no storms or natural disasters in this metaverse.

HTC’s Vive Focus 3 headset with Facial Tracker, a mono camera that plugs into a USB-C port under the visor and captures your expressions. Photos: Charles McLellan/ZDNET

You can move around the meeting room using the controller to turn around or teleport to another location, shake hands with other participants or congratulate them, and access a bunch of meeting tools from the Sync menu. The sound is spatial, so an avatar’s speech comes from the good part of virtual space. If necessary, you can mute your microphone, engage another avatar in a “private chat” that other participants won’t hear, or even designate a “safe zone” where other users’ voices can be muted and the records can hide identification.

In my Vive Focus 3 headset, the Facial Tracker was plugged into a USB-C port under the visor. This accessory includes a mono-tracking camera which, according to HTC, “captures expressions through 38 blending shapes on the lips, jaw, cheeks, chin, teeth and tongue to accurately capture facial expressions and lifelike mouth movements on the avatars”. It certainly provides an improvement when it comes to expressing yourself, although we did notice a slightly disturbing backlight quality in the mouth cavity at times. 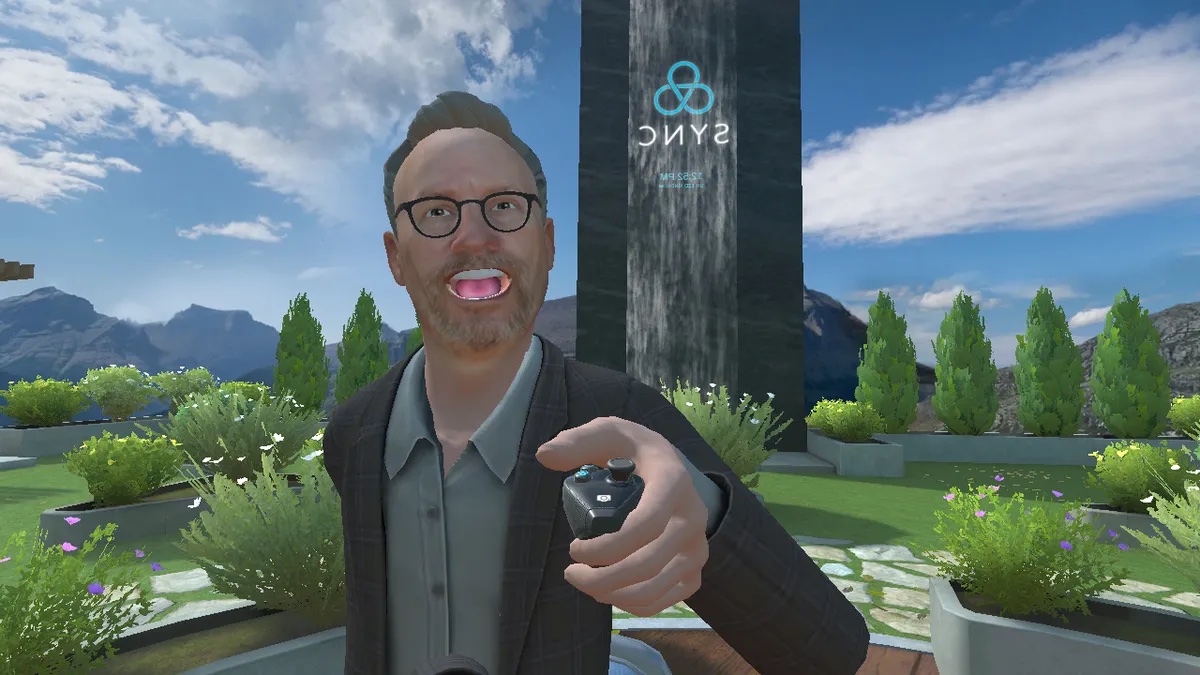 The sync menu offers a laser pointer as well as tools such as pen, emoji, sticky notes and camera. Text and images created during a meeting can be accessed later. The sync menu also provides access to files, a web browser, your PC desktop (if you’re using a PC-connected headset), a virtual whiteboard, and information about user roles and permissions. With a full subscription, resizable file, web browser and PC desktop windows can be made visible to all participants. Each meeting room also has a maximum of three giant screens on which content can be projected. With a PC VR headset, you can even join Teams and Zoom meetings as an avatar from a Sync virtual meeting room (again, a full membership is required).

The ability to upload 3D models (FBX, OBJ, gITF or Unity Asset Bundles), manipulate them with the controller and show them to meeting participants (only the host can interact with a 3D model) is a key advantage of Sync. We found a free FBX file of a Kinder Bueno, zipped it along with its texture file, and uploaded it to the conference room, where Steve Ranger and I debated who should most likely consume the virtual snack. Naturally, design teams looking at a complex model would be more professional, but we ran into the limitations of our free subscriptions. 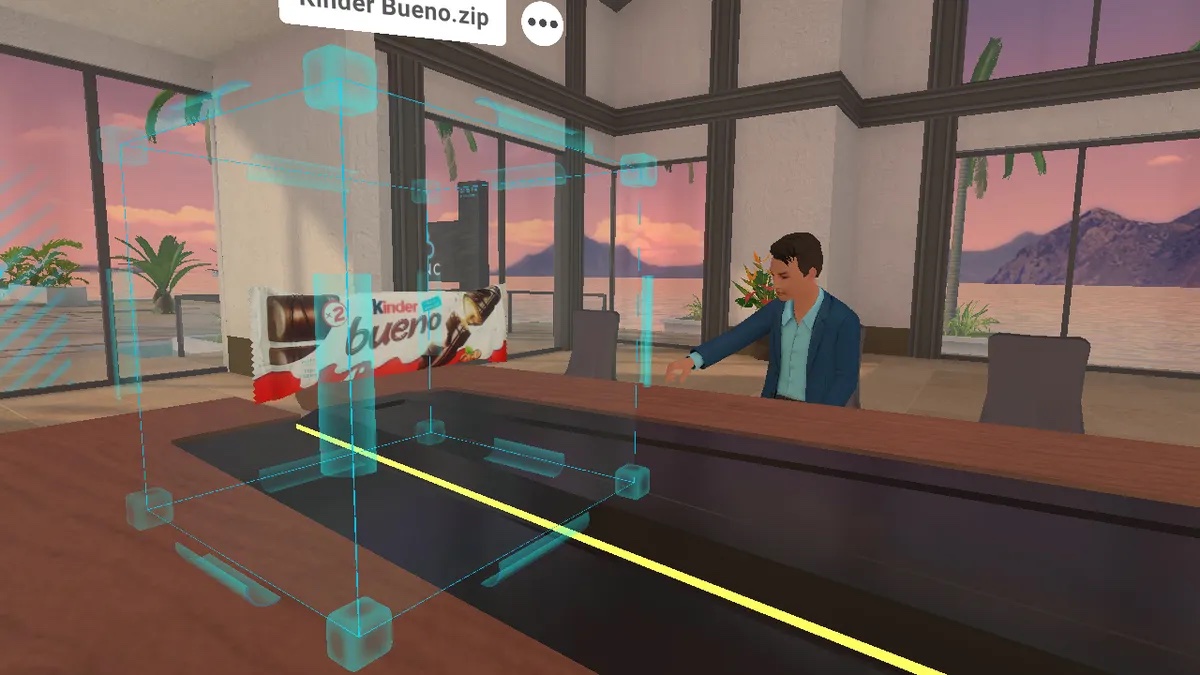 There are many more features in Vive Sync, and more are on the way. For now, it’s fair to say that Steve Ranger and I were surprised at how interesting and even fun the experience of coming together in the Vive Sync metaverse was. Obviously, the novelty element wears off over time, but we really enjoyed the exploration phase.

Is this the future of meetings?

Even without cost limits, metaverse meetings would likely become cumbersome and cacophonous beyond about 30 users. But given the headset’s current prices and usage time—up to about an hour with the Vive Focus 3 in our experience—it takes a lot less teams to get a return on investment.

And what ROI do you get compared to the traditional Teams/Zoom video grid? The key, in our opinion, is an increased sense of presence – despite the artificial nature of avatars interacting in a virtual meeting room and the learning curve of the user interface. This should be especially beneficial for remote workers who often feel like “strangers” when meeting office colleagues huddled around a conference room table, mostly talking to each other and intermittently addressing a camera located at the front of the room and for a large wall screen.

There are video solutions to address this proximity bias, but as headset prices drop, wearability improves, avatars become more realistic, and virtual meeting software becomes more capable, small and medium-sized teams may increasingly turn to the VR alternative. However, it may take a good portion of Gartner’s decade-plus time horizon.