The SRO Racing Festival is an opportunity to end this 2022 season of the FFSA GT French Championship at Circuit Paul Ricard. There was already a first night race this Saturday, making way for the last race of the season.

For the weekend’s second race, the winners of the previous day will start from pole position. Espace Bienvenue BMW M4 GT4 in the hands of Benjamin Lessennes (who will take the start), then taken over by Ricardo van der Ende. We are in the middle of October, but we are still enjoying mild weather, it is 22°C at the time of departure. There will be 42 cars online.

At the end of the formation lap the field broke up as the race started, the first turn was pretty much short circuited by a number of cars, but behind it was already a dramatic turn, the leaders in Pro/Am, Alpine CMR #36 was hit and it is already the end of the race, they will not be able to defend their luck. Alpine #35 Bodemer Auto of Grégoire Demoustier is on the floor. that Safety Car has entered the field and disappears after one turn!

BMW L’Espace Bienvenue #17 of Benjamin Lessennes still leads the race ahead of Romain Carton in #74 Aston Martin of Racing Spirit of Léman, Hugo Chevalier in #87 Mercedes of AKKODIS ASP Team is in pursuit. The rolling start procedure is under investigation. The Drive Through penalties rain down on cars that cut straight in turns 1 and 2, these are cars #81 (AKKODIS), #777 (CSA Racing), #76 (Bodemer Auto) and #72 (GPA Racing). 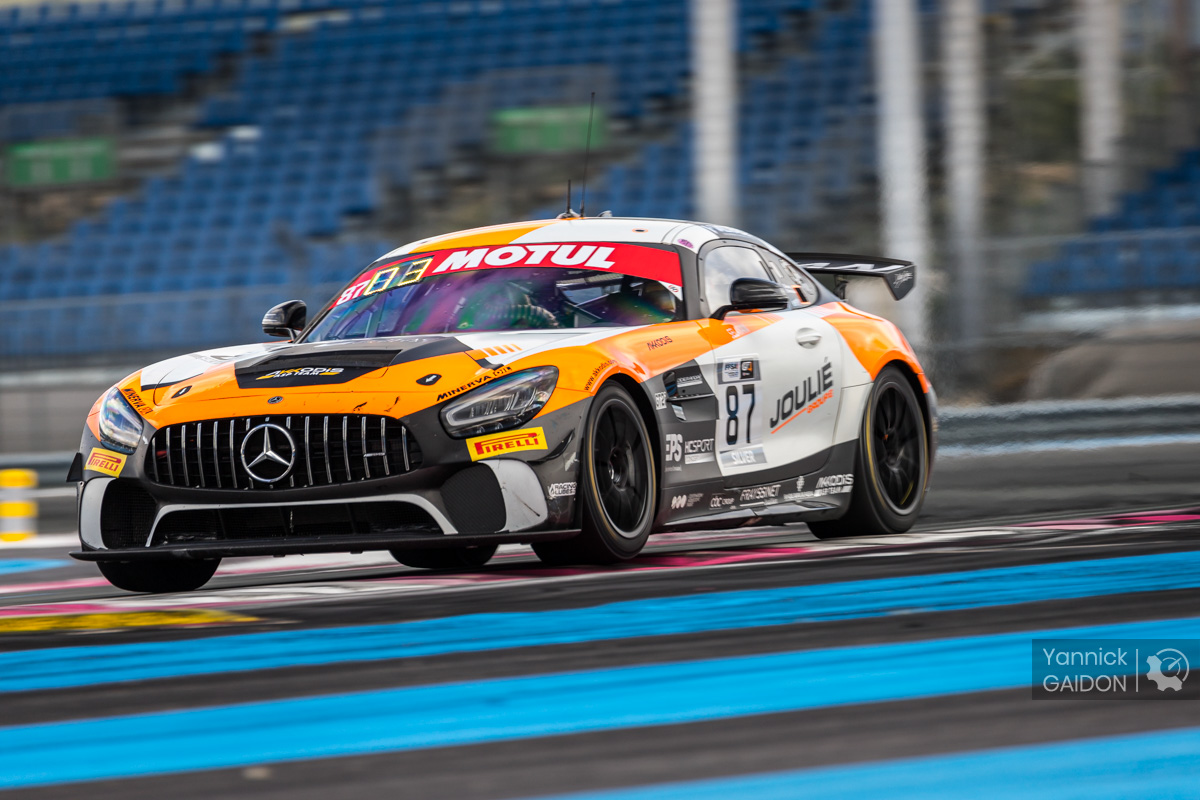 After 20 minutes of racing, the Top 10 is as follows: Lessennes (L’Espace Bienvenue), Carton (Racing Spirit of Léman), Chevalier (AKKODIS), Bastard (Saintéloc Racing), Tribaudini (CMR), Varutti (AVR-AVVATAR), Jouffret (Team Jouffruit), Campbell (K-Worx ) ), Huteau (K-Worx) and Beltramello). Hugo Chevalier managed to get rid of Romain Carton. Alban Varutti on his Veranda sees the return of Olivier Jouffret’s Mercedes, it is the battle for first place in the Pro/Am category and above all the title race for the drivers of the AVR-AVVATAR team (Porsche #10). 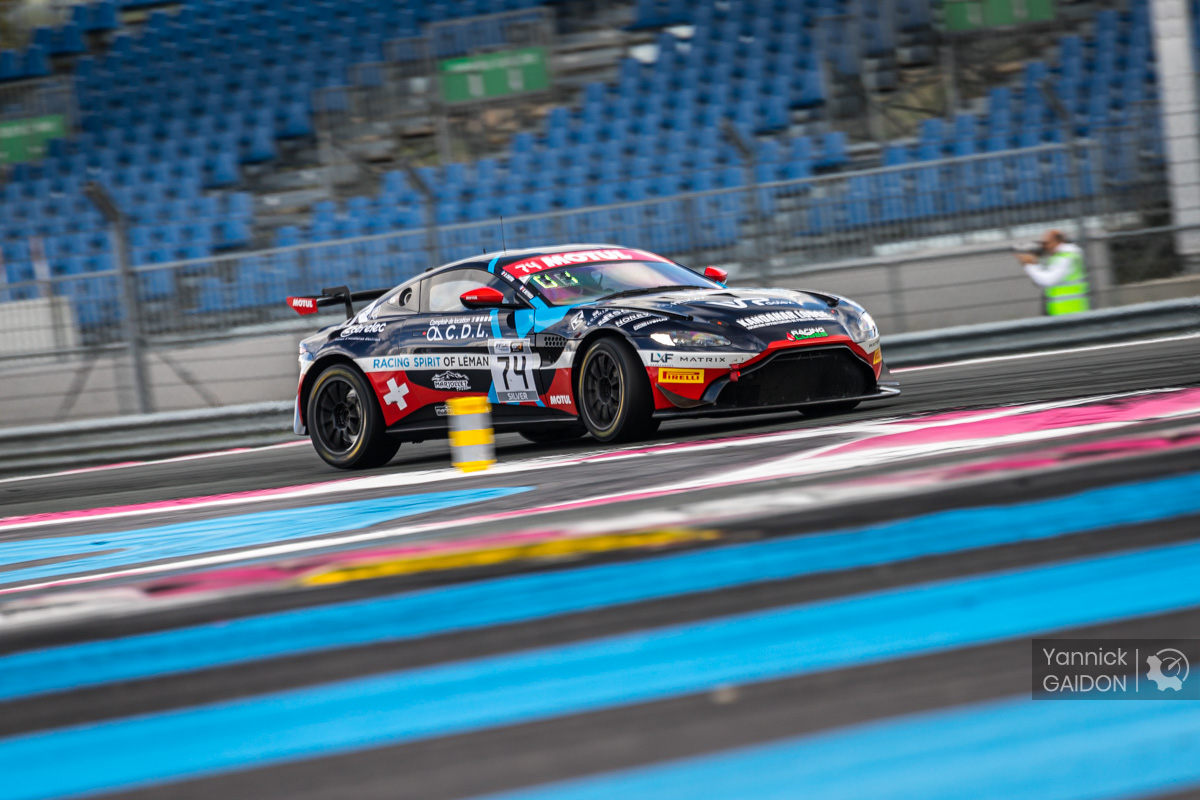 We arrive in the open window of pit stops to change drivers. The Mercedes #64 from Team Joufffruit immediately threw itself into the pit lane, we tried the undercut on the Porsche #10 AVR-AVVATAR. In the last 3 minutes the leader Lessennes returned to the pit to hand over the wheel to Ricardo van der Ende, this is also the case for the Aston Martin #14 of Racing Spirit of Léman, Hugo Chevalier extended the baton to the last seconds of the pit window, had the 15 seconds left to do so.

And finally on the side of AKKODIS with the #87 Mercedes returning to the pits late, Enzo Joulié took over from Hugo Chevalier and is in the wake of the leading BMW. In the Pro/Am Team Jouffruit’s #64 Mercedes with Eric Trémoulet at the wheel managed to take the lead, their very early stop worked. He is 5th overall and first in his class ahead of Timothé Buret in the #121 K-Worx Porsche, Julien Piguet in the #10 AVR-AVVATAR Porsche holding his place on the provisional podium. 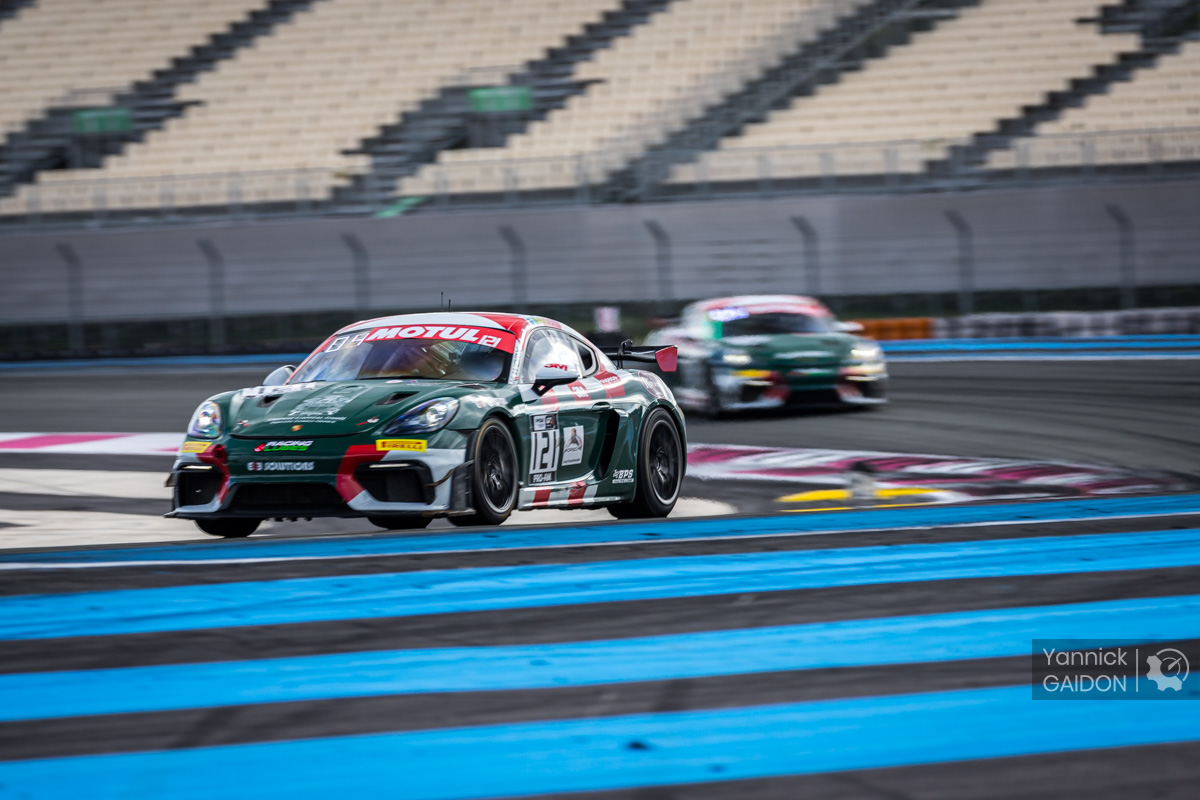 And a new twist for Team Jouffruit, a 2-second Stop & Go for a violation during a pit stop! The Mercedes is running, it will lose big in the standings! 15 minutes from the checkered flag, the position of the Top 10 is as follows: van der Ende (L’Espace Bienvenue), Joulié (AKKODIS), Weyrich (Racing Spirit), Meyuhas (Saintéloc Racing), Lémeret (CMR), Buret (K-Worx), Mogica (K-Worx), Piguet (AVR- AVVATAR), Cauhaupé (Autosport GP) and Petit (CD-Sport).

Leading the race is van der Ende 4.6 ahead of Enzo Joulié, all in the silver category. In the Pro/Am, Timothé Buret leads the Porsche ahead of a hat-trick from Stuttgart. In the Am category, Safronov leads by 1.5 on the Full Motorsport Audi. Alpine #155 from Autosport GP returns to the pits to retire, it should threaten the Porsche of Julien Piguet. New lead change in Pro/Am 5 minutes from the checkered flag, Timothé Buret resumes his good at Hugo Mogica, Porsche’s duel! 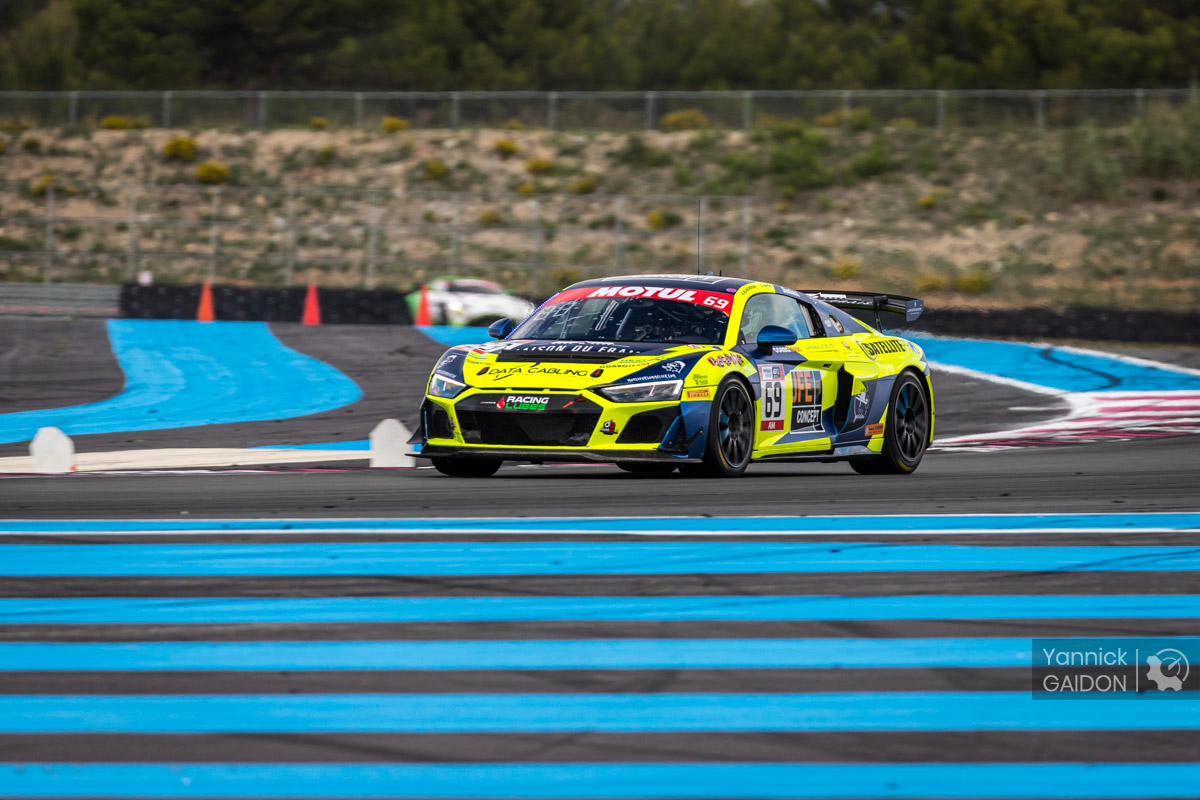 The final lap comes, the BMW M4 GT4 (the last race for this model, which will be replaced by the new iteration next year) from L’Espace Bienvenue repeats its performance from the day before, Ricardo van der Ende and Benjamin Lessennes win again they were untouchable. The silver podium is completed by Enzo Joulié and Hugo Chevalier in the #87 AKKODIS ASP Team Mercedes and the Victor Weyrich / Romain Carton duo in the #74 Racing Spirit of Léman Aston Martin Vantage. 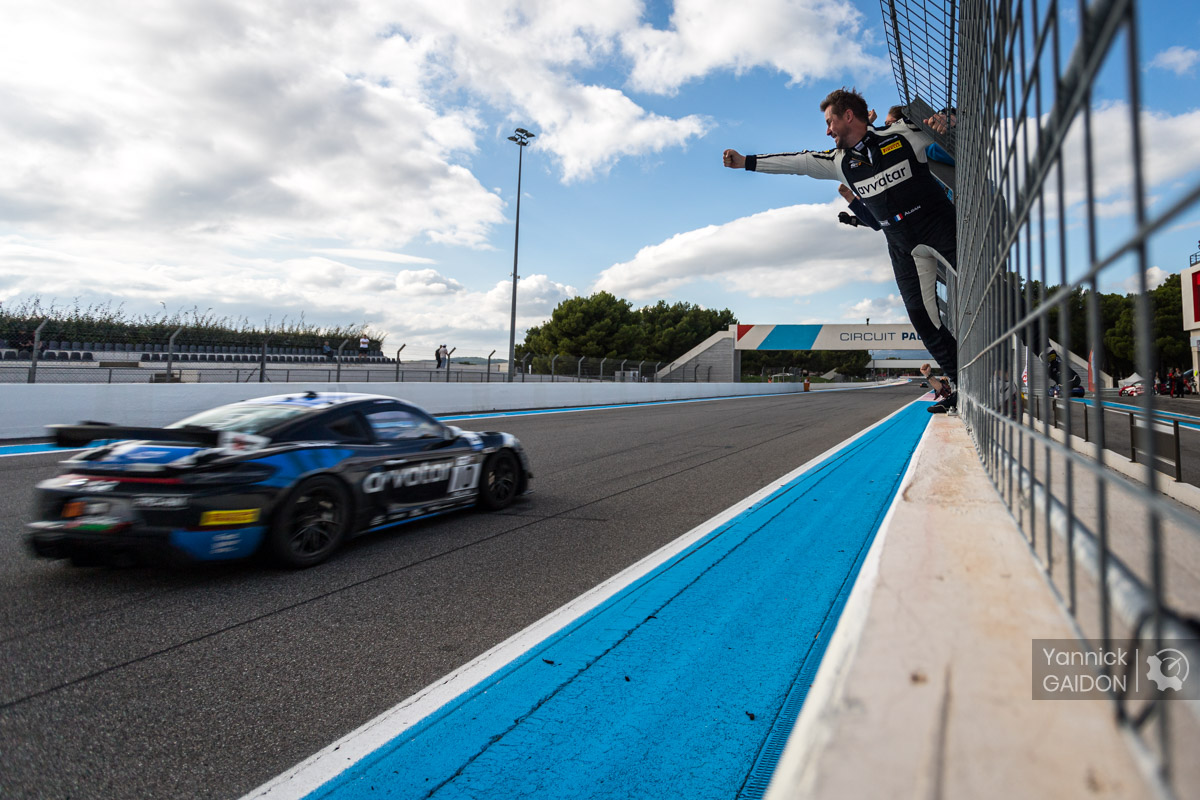 In the Pro/Am category, it’s victory for Timothé Buret and Christopher Campbell in the K-Worx Porsche #121, bringing a Porsche hat-trick! Hugo Mogica and Pascal Huteau from the same K-Worx team are ahead of Julien Piguet / Alban Varutti from AVR-AVVATAR who wins the Pro/Am title. In the Am category Stanislav Safronov and Vaintrub Aleksander of NM Racing Team won ahead of Christophe Hamon / Michaël Blanchemain of Full Motorsport who won the Am title and Jean-Laurent Navarro / Pierre-Arnaud Navarro of JSB Compétion who completed the podium!