Under the influence of climate change, the snow is gradually giving way to vegetation. A study by the universities of Lausanne and Basel, published Thursday in the journal Science, reveals the spread of vegetation in the Alps thanks to satellite images taken between 1984 and 2021

This is not good news. The Alps are visibly greener or rather in the light of satellites. in question? Climate change and rising temperatures. That is the conclusion of Swiss scientists who have analyzed high-resolution images of all the Alps, taken from space, over the past 38 years.

“We were frankly very surprised to find such a huge greener trend,” Sabine Rumpf, assistant professor at the University of Basel and lead author of the study, published Thursday in the journal Science, told AFP.

These are: reduction of snow cover and development of vegetation, caused by temperature rises. The phenomenon is already well known to the Arctic, but was so far only slightly studied on a large scale for mountain areas. However, these two sites are heating up much faster than others on the planet, and scientists therefore suspected comparable effects.

The vegetation takes precedence over the snow package

For their analysis, they isolated regions above 1,700 meters above sea level to exclude areas used for agriculture. Above this altitude, forests were also excluded. Result: On almost 10% of the observed surface, there was no more snow in the summer at the end of the analyzed period, while it was in the beginning.

Sabine Rumpf also points out that satellite imagery only allows us to verify the presence or absence of snow. However, the first effect of warming is to reduce the depth of the snow pack, which has been observed by local measurements. So “these almost 10% may not work out much, but that does not mean that nothing is happening in the other areas”.

Second, the researchers compared the amount of vegetation using wavelength analysis to detect the amount of chlorophyll present. The result was even more striking: in 77% of the observed area, vegetation increased.

The vegetation grows in three different ways: Plants have grown where there was none before, some grow and become denser due to more favorable conditions, and finally species that usually grow at lower altitudes and grow faster and easily colonize higher areas.

“It is climate change that is leading to these changes,” Sabine Rumpf said bluntly. “Warming means longer growing seasons,” and “the warmer it is, the more precipitation falls there as rain, not snow.”

The consequences of this “greening” are several. First, much of the drinking water comes from melting snow, the study points out. If water is not stored as snow, it disappears faster via rivers. In addition, the habitat of species that are specifically adapted to the alpine environment is disturbed. And the disappearance of the snow could also hurt the ski tourism industry. Finally, “what we tend to forget is the emotional aspect of these processes, the Alps are a symbol, and when people think of Switzerland, it is often the Alps they think of,” says Sabine Rumpf.

For the future, optimism is not at the meeting, as a vicious circle has actually been created. While snow reflects about 90% of the solar radiation, the vegetation absorbs much more and then returns it as heat. Which in turn accelerates the warming, and therefore the melting of snow and the growth of the vegetation. Etc.

An uncertain future for the Alps

However, the exact development of the Alps in the coming decades is still unknown. “In terms of snow, it’s pretty clear. The snow package will disappear more and more, especially at lower altitudes, ”explains Sabine Rumpf. However, at present, another phenomenon, the transition to brown color, indicating that the soil is no longer covered by snow or vegetation, has only been detected in less than 1% of the surveyed area. This is much smaller than what is observed in the Arctic or in the mountains of Central Asia. 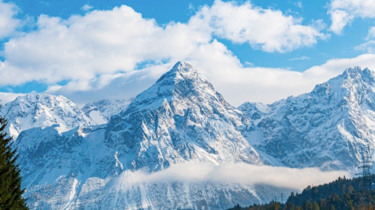 This trend is driven by two factors: the increase in episodes of extreme rainfall followed by drought and the drying out of water from melting snow for plants. “We do not know in the future whether the transition to brown will become more frequent and more frequent, and reverse the trend,” concludes Sabine Rumpf, who would like to be able to repeat these observations in a few years, to verify it. .