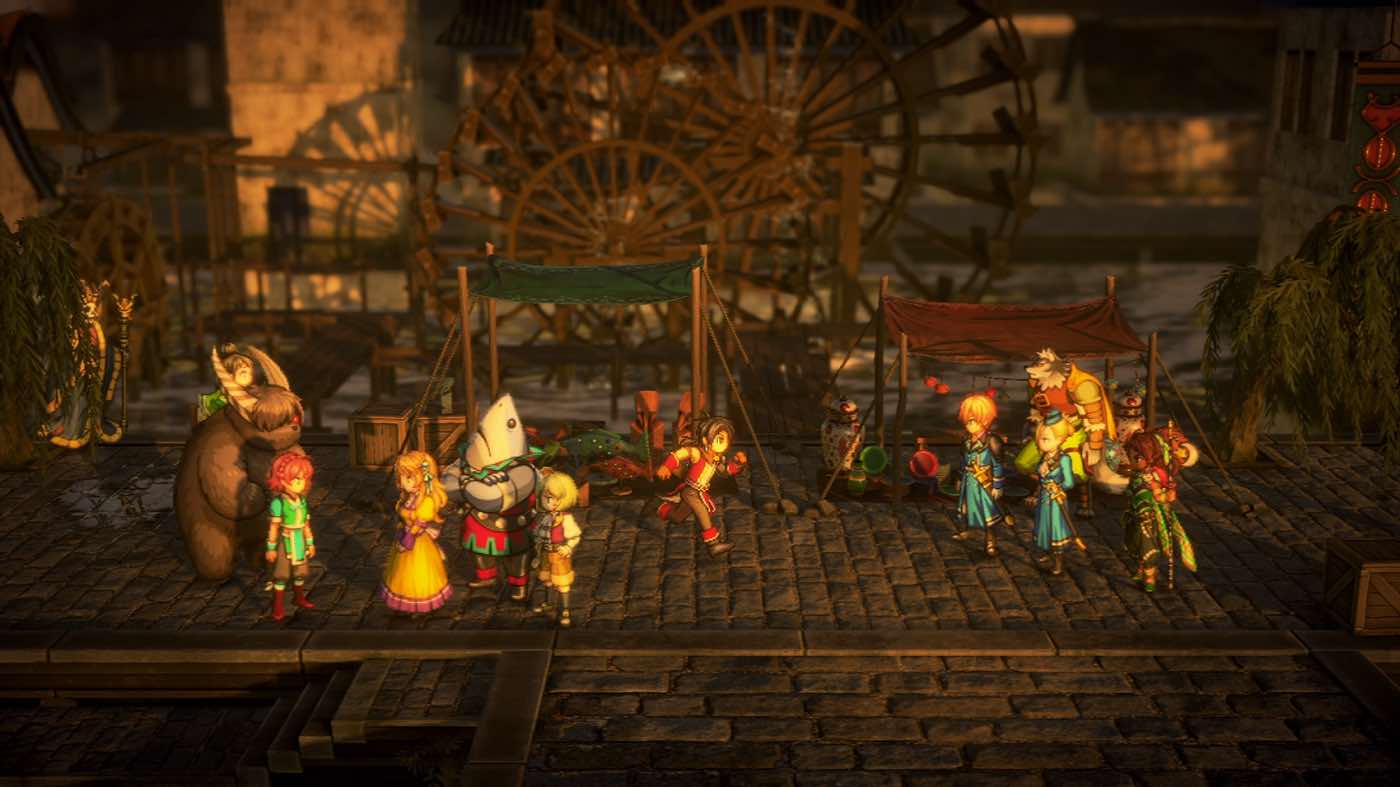 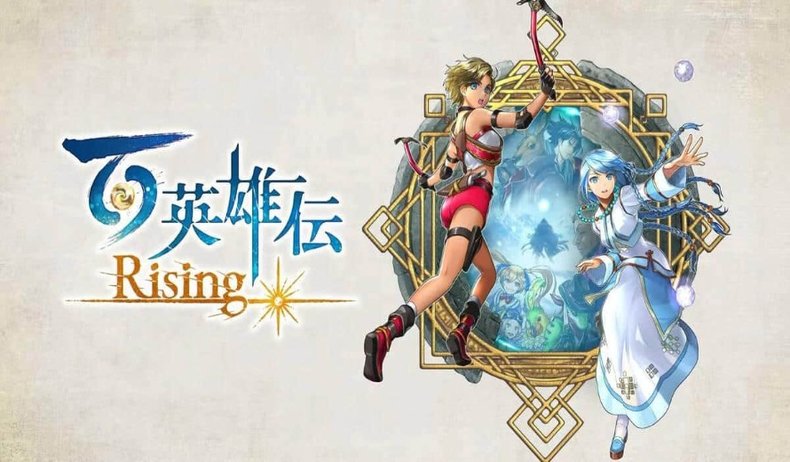 Eiyuden Chronicle: Rising is a prequel that aims to introduce the universe and some of the main characters in Eiyuden Chronicle: Hundred Heroes, which is scheduled for release in 2023. The latter is expected to be the sequel to the Suikoden saga, as many developers of the Rabbit The & Bear studio worked on various episodes of this series.

For the sake of good order, this prologue was originally intended as a simple bonus offered to contributors to the main game’s fundraising campaign, but it quickly became a project in itself. It also stands out for its Action-RPG-oriented fighting style, where the Eiyuden Chronicle: Hundred Heroes will be a pure JRPG with turn-based combat phases.

One quest can hide another

Our adventure begins in the shoes of CJ, a young treasure hunter who travels to New Nevaeh to complete an initial mission and bring back to his father an artifact with greater wealth than the one he himself had once discovered. Situated a few steps from a tumulus containing many magical artifacts, this village is the perfect place to accomplish our great mission.

Upon our arrival, we discover that a recent earthquake has damaged the infrastructure and that the population is working on reconstruction. We then meet the village mayor and learn that before any exploration attempt in tumulus, we have to pay an immense tax to get a digging permit. Since we do not have the funds to pay such an amount, we are offered to perform various tasks and assist the villagers in the reconstruction towards the delivery of our precious sesame. Among other things, we are helping to build more stores, which will be very useful for our progress. To complicate things, the earthquake has created a rift in the defense, and many monsters now populate the quarry and the vast forest where we have to gather our materials. To help us in our big task, we can count on two companions joining our ranks over the course of the main story. A valuable help, because we very quickly understand that these small troubles are only the tree that hides the forest, and that a greater fate awaits us.

The title is intended as a prologue in a broad sense. Besides leading to the discovery of the universe and the cast in the upcoming game, it is also an introduction to RPG mechanics and could actually appeal to those less accustomed to the genre. As in any good role-playing game, we collect experience points, which increase our level and our qualities of attack, defense and magic. Resources are also being extracted to perform quests or make new items and equipment. There are, of course, magic runes of various types that will have an impact on the effectiveness of our attacks or our defenses. These mechanics, which are the very essence of an RPG, can sometimes quickly become complex to master. The developers have wisely brought each of these elements little by little over the course of the adventure. A very intuitive menu and an informative quest log also contribute to this supposed simplicity.

On the gameplay side, accessibility is again the key. A key is assigned to each character, which allows us to either trigger an attack or switch from one fighter to another. Each of our companions has their own strengths and weaknesses, which enrich the stages of action and keep us from any monotony. A common key allows you to unleash a special ability specific to each character, such as dodging, double jumping or parrying. These capabilities are perfected along with our fighter equipment, allowing us to reach areas that were previously inaccessible. Finally, it is also possible to trigger a team combination by switching from one character to another at a specific time. This last mechanic can be automated if desired by selecting the “single action” mode via the settings menu.

In order not to deter the player with the inevitable multiple round trips between the different areas of the game, the developers have integrated a very comprehensive fast travel system that even allows us to go from one corner of the village to another in a fraction of a second. A very handy tool that also allows us to regularly save our progress.

We look in retro, but we move forward

How not to be nostalgic in front of the artistic management of the Eiyuden Chronicle: Rising? The design of characters and environments reflects the golden years of RPGs on Super Nintendo or Megadrive. However, the title is updated with its 2.5D and subtle lighting effects. The soundtrack also strikes a chord with us, drawing inspiration from the orchestrations of 90s productions and at the same time introducing more modern samples. Too bad the playlist is limited to one song per track. environment, and some musical loops end up being annoying. We also regret that the bestiary is not more extensive, but let us not forget that this is a prologue. 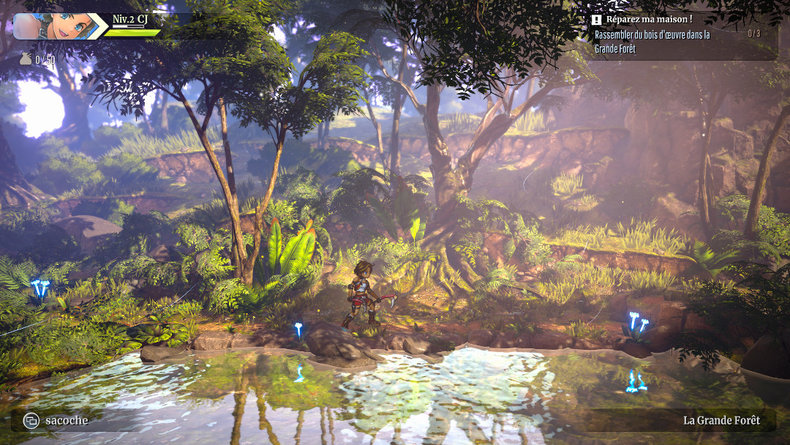 The modernization also affects the degree of difficulty because the title is much less demanding than its ancestors, and its more relaxed orientation is also highlighted in the study communication. The developers wanted to adapt to modern players, and this is a point that should be noted. At the end of the main story, however, a difficult condition is available to the bravest among us.

The life of the title depends on our type of player. It takes 20-25 hours to work your way through the main story and reach a comfortable level for the final match. Once completed, the many side tasks and the new level of difficulty extend this lifespan. Although they have not announced in what form this will become a reality, the developers have clarified that perks will be awarded in the Eiyuden Chronicle: Hundred Heroes to players who have reviewed this prologue.