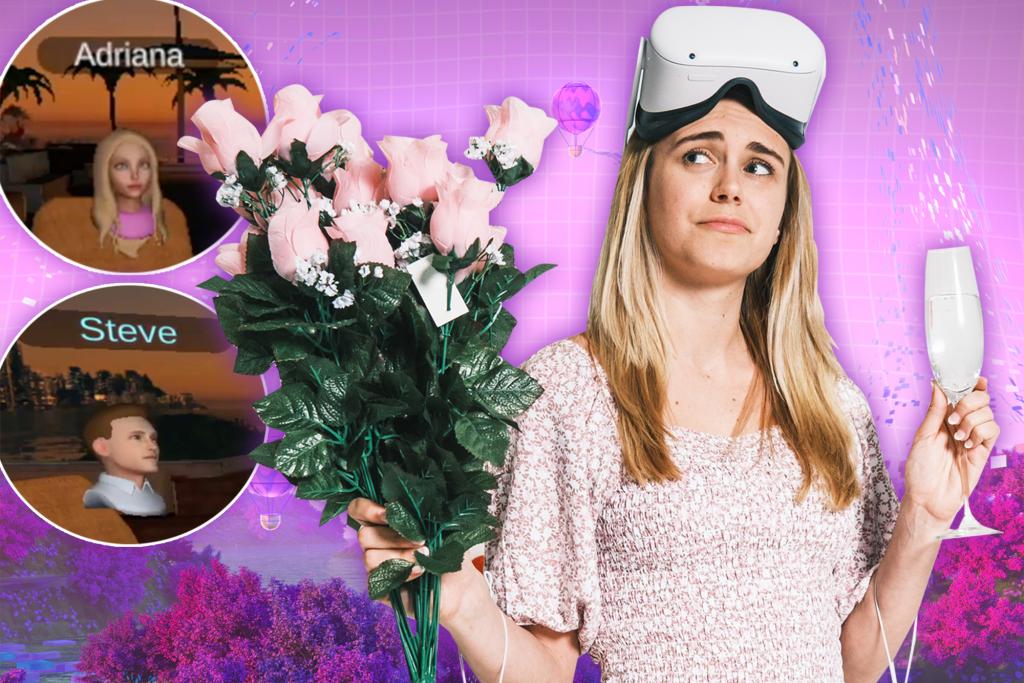 I’m on a first date, but I’m wearing sweatshirts, no makeup, my hair is wet, and I’m sitting on my couch at home.

My buddy, Steve, does not have a body. He’s just a floating face and a pair of pale hands.

“Strange to be a white guy,” he jokes. It dawns on me that I have no idea what he really looks like, his age or even his real name. We’re on a blind date in the meta verse, and my avatar interacts with Steve’s avatar in a virtual rooftop bar while I relax in my Manhattan apartment.

Steve and I were paired on Predicting Reality, an app that creates VR worlds for different types of interactions, including therapy, business meetings and now dating coaching.

I was preparing for my big metaverse date, just like I was preparing for any date: FaceTiming, my best friend who also lives in New York, in anticipation. I had absolutely no idea or expectation of sharing, which made me a little nervous. I had no idea what the guy I was matched with would be, even though before the date I sent my “datingverse” coach, Grace Leeun, a brief summary of what I’m looking for, especially an outgoing man and career-oriented.

A few minutes before the specified start time for the date, I put on my Oculus headset and grabbed my controllers. On the Foretell Reality app, I created an avatar that vaguely resembled me, and then went into a private virtual space.

There I entered a code that Lee got me. It quickly transported me to an outdoor rooftop bar overlooking the ocean and city skyline. It just looked like a mid-century video game. I could vaguely hear people chatting around me – a track in loop playing through the Oculus headset – and as I turned my head, I got a full view of a virtual bar where a bartender avatar was making drinks.

Lee greeted me on the roof, and her avatar’s long black ponytail vaguely reminded me of pictures of her I had seen on Instagram. Shortly after, a blond male head appeared on the seat next to me. A mark hovering over his head stood on Steve.

We said hello, and then Lee popped in to explain how to date the VR world. She made us turn around to look each other “in the eyes”. VR headsets have not developed the technology to read and display facial expressions, so I stared into Steve’s slightly twisted and vacant animated brown eyes in an attempt to create some sort of connection. But I did not notice anything; it was just awkward.

Lee explained that the lack of facial expressions and full body language in VR means we have to rely on our verbal communication. But we could also use hand gestures by putting our controllers away from us and moving our hands in front of the headset.

Then Lee presented the plan. She asked us two questions and then disappeared out of sight while Steve and I talked for several minutes. And – no pressure! – everything would be recorded so Lee could go back and criticize us.

Lee’s first question was “What is your favorite TV show?” and how are you?”

I talked about my enthusiasm for the final season of “Grace and Frankie”. Steve, who spoke in a deep voice that may or may not have been digitally altered, talked about his favorite anime show, which did not really interest me.

Then we became personal and I was a little hesitant. Steve opened up about how COVID, moving and his job put a damper on his love life.

“I wish I had some cool stories for you,” he said. I tried to make him feel better, agreeing that it had been difficult. In fact, I had tons of funny dating stories about the pandemic, but I got tired of sharing them. I was afraid to scare Steve with stories about how hard my love life was. I quickly changed topic.

We then talked about Mike Tyson beating a fan, Steve growing up in Michigan, and my family’s love of the sport. At one point, we were hanging on to a strange tangent while talking about debutant balls, and Lee whispered into my headset that I should change the subject.

Then Lee came back on screen and played part of our date, criticized us and noted when the conversation stopped and when things felt natural and easy.

Steve admitted that some of his jokes (like trying to tease me about going to my friend’s debut ball) failed, and he relied on comedy to avoid getting personal.

Lee noted that I often repeated Steve’s energy and language in an unconscious attempt to reassure him – a good thing. But sometimes I let him wade too long on a strange topic (again, debutant balls).

Then it was time to say goodbye. I took off my headset and abruptly ended the date. It had not been a romantic interlude, but it had been a learning experience.

And that’s exactly Lee’s goal. She does not expect people to fall in love – and does not connect users afterwards unless they specifically ask – but wants to help them learn to communicate better.

I did not ask to see Steve again – if that is his real name at all – or go to bed and dream of feeling his floating avatar head. But I can not wait to use some of what I learned in the meta-verse in real life.