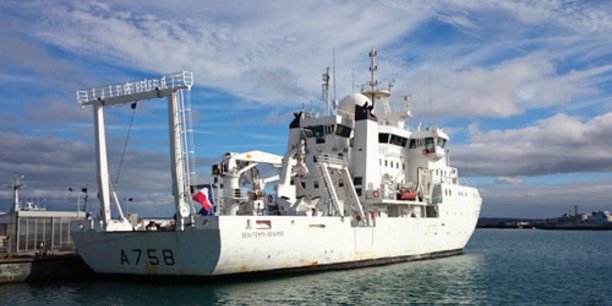 The French navy may become the first navy in the world to be equipped with operational systems based on next-generation quantum technology. It will be equipped with the GIRAFE system (Interferometric gravimeters of Research at Embedded Cold Atoms) developed by ONERA. In 2026/2027, four fleet surface vessels will be equipped with cold atom quantum gravimeters (GIRAFE), revealed ONERA CEO Bruno Sainjon during the inauguration (February 8) of a new transverse laboratory dedicated to quantum technologies, called QTech, and piloted by ONERA.

If we were to still convince ourselves of the strategic technological role that ONERA plays within the Ministry of Defense and the French technological and industrial ecosystem, this new concrete example should remove the last doubt. “We feel legitimate” on quantum, also stressed the head of ONERA on the occasion of this inauguration. QTech Lab is Sstructured around 4 thematic axes: quantum communication, optonics quantum, quantum calculation and atomic sensors. “The first results are expected more on quantum optics than on quantum radarestimated in June 2021 Bruno Sainjon during the Paris Air Forum, organized by La Tribune. With quantum lidar technologies, we should be able to design interesting projects faster. “.

More generally, the Ministry of Defense is well under way in the quantum field a year after Emmanuel Macron’s launch of France’s quantum strategy (1.8 billion euros over five years). Because these applications are potentially revolutionary for armies. Thus, the Minister of the Armed Forces, Florence Parly, participated in the launch in early January of a new national quantum computer platform installed at the Atomic Energy Commission’s Very Large Computing Center. An investment that contributes to the technological sovereignty of France and to the benefit of the armies.

Gravimeters already tested by the Navy

After developing and testing this gravimeter in collaboration with Navy’s Hydrographic and Oceanographic Service (SHOM), ONERA will transfer all its know-how to Muquans (iXblue group), a technological SME based in Talence in the Nouvelle Aquitaine region, specializing in production. of static atomic gravimeters. This quantum gravimeter in particular makes it possible to map the oceans with incredible precision (eighth digit after the decimal point). This will allow military and civilian vessels to know exactly where they are.

In addition, the arrival in the fleet of this autonomous system, which does not require conversion operations at the quay, will allow armies to free themselves from US GPS or European Galileo satellite positioning systems that can be blocked. Finally, this technology is essential for the planning and implementation of maritime and air-sea operations.. Among the other applications: geophysics of oceanic zones, exploration of the seabed (ore, oil), gravity mapping, navigation without GPS. In addition, ONERA works on aerospace applications.

More than 15 years of investment in quantum

In 2006, the Directorate-General for Armaments (DGA) entrusted ONERA with the development of a Giraffe quantum gravimeter via the CA-SENSORS technology project program. Then, in 2012, the research office developed a first unit whose precision reached 10-8 to 10-9 g in the laboratory. A success that made it possible to launch the development and design of an onboard prototype that was capable of erasing disturbances from swell and vibration, to meet the needs of the fleet. In 2016, ONERA and SHOM conducted two gravity mapping campaigns off Brest using a gravimeter using quantum technology.

In September 2020, ONERA was notified by DGA of a contract € 13 million for the development and delivery of a Girafe 2 system ( intended to be powered by SHOM. The first purpose of the notified contract is the industrialization of the prototype developed by ONERA and the production of the first system, shared between the Research Office and Muquans as a subcontractor. The ministry could order three more systems. The first gravimeter is to be validated at sea in 2023 and then delivered to the Navy while the three systems could be delivered at a rate of one per year.