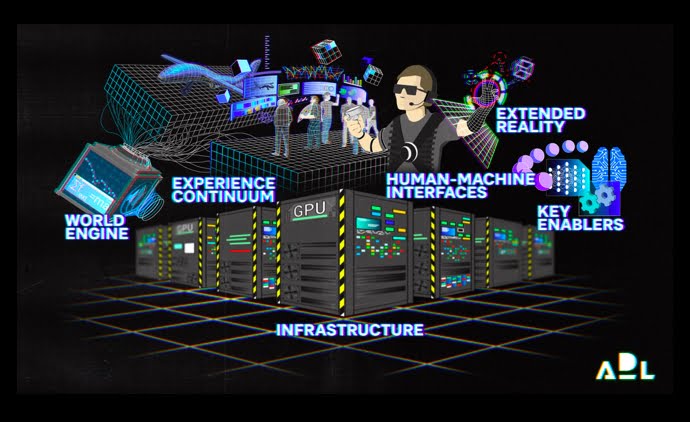 Some of the technologies that support Metaverse, as we defined it in our previous article, are not particularly new. But since the announcement of Facebook (now Meta) in September 2021, one can have an ambivalent feeling: either Metaverse is something completely new, or Metaverse is simply repackaging a set of technologies. decades.

To begin answering these questions, present this article framework which we developed with Arthur D. Little. This framework aims to represent Metaverset’s architecture in six layers. Six layers covering the “value chain” of Metaverse. Six layers with the top level corresponding to new experiences and business models and whose lower level corresponds to the required hardware and software infrastructure.

Team # 1, which we named Experience Continuumis the layer that brings together all the new uses and new ones business models, existing and future. These new uses and business model blurs the boundaries between reality and virtuality as we defined it in our previous article (think especially augmented reality and creative economy). Like the Internet today, use cases can be segmented into three categories: individuals (socialization, coziness, play, etc.), companies (exchange, collaboration, etc.) and industry (modeling a production chain or a distribution network).

Team # 2, which we named Human-machine interfaces (human-machine interfaces or HMIs), as the name suggests, is the layer that allows humans to perceive and interact with layer # 3. HMIs are the gateway to Metaverse. HMIs include a mix of hardware and software that allows users to send input to the machine and to the machine to send outputs users, thus forming a coherent interaction loop. Some of the underlying technologies, such as keyboard and mouse on input or the screens on the side outputs, are very mature. Other technologies, such as brain-machine interfaces, are on the contrary much less mature. Between the two there is a whole range of more or less mature HMIs such as virtual and / or augmented reality headsets, holography, haptic interfaces. The more these technologies evolve, the more the immersion and interaction with Metaverset will involve our five senses.

Layer # 3: Augmented Reality – The Visible Side

Team # 3, which we named Augmented reality (Extended Reality, or XR), corresponds to the immersive representation that reinforces or replaces reality. It is a spectrum that ranges from 100% real to 100% virtual. Extended Reality combines the real world and objects with one or more layers of computer-generated virtual data, information or presentations. Thus, augmented reality is in a way the visible face of Metaverset. Extended Reality includes Virtual Reality (VR) and Augmented Reality (AR), as well as a range of options in between. The technologies that make it up are also in varying degrees of maturity. For example, virtual reality today is much more mature than augmented reality. The more these technologies evolve, the more they will converge, and the more Metaverset will be synonymous with continuity between the real and the virtual.

Team # 4, which we named WorldEnginecorresponds to all the software that allows the development of virtual worlds, virtual objects and their process (digital twins) and virtual people (avatar or digital people). that WorldEngine included in particular four essential building blocks. i) The graphics engine, responsible for creating and reproducing the visual layer in the virtual world. ii) The logical engine that is responsible, for example, for the interactions between different virtual entities. iii) The physics engine that makes it possible to create e.g. realistic multiphysical modeling and simulations (eg regarding fluid dynamics or gravity). iv) The presence engine, which allows users to feel present anywhere as if they were physically there (eg the first presence technologies are found in 4Dx cinemas, which integrate images on the screen with seats with synchronized movement and real effects such as water, wind, fog, perfume or snow). Here, too, the underlying technologies have quite varying levels of maturity.

Team # 5, which we named Infrastructure, as the name implies, corresponds to the physical infrastructure (network, computing power and storage) that guarantees real-time data collection and processing, communication, representation and response. The infrastructure is the pipe that makes it possible to guarantee the three essential features of Metaverse: immersion (which increasingly allows users to be “on” the Internet), interaction (which allows users to interact in real time as if they were in the same room) and persistence (which means that Metaverse continues to exist even if the user is not logged in). The infrastructure is probably the smallest sexy and which almost no one talks about, and yet it is the most critical: the infrastructure required for Metaverset does not yet exist.

Team # 6, which we named Critical enables, brings together a set of technologies, mainly software, that are essential for the proper functioning of the other layers. This sixth and final layer is a bit of oil in the wheels. It brings together in particular IoT (Internet of Things), blockchain and NFTs, cybersecurity and artificial intelligence (AI). The latter is necessary, for example, for the automatic generation of digital twins (Digital Twins) or for the creation of realistic avatars with realistic attitudes.

that framework Architecture presented above is, of course, a simplified view of reality – if we can actually talk about reality when we talk about Metaverse. In this it is quite debatable. And we encourage you to tell us what you think about it, even to challenge this framework. However, this simplified view helps to analyze the complexity underlying Metaverset. Especially in future articles, we will dive deep into each of the layers to understand the ins and outs, as well as the maturity of each of the technological bricks that make it up. This approach will allow us to answer the question: should I be interested in Metaverse as part of my business? What are the current and future options?

(Layers of the Metaverse – illustrated by Samuel Babinet)